Varicocele: A Common Cause of Male Infertility That Can Be Treated If you and your partner have been struggling to conceive, it’s possible that a varicocele—an enlarged vein inside your scrotum—could be the culprit causing your infertility.

This common disorder, which usually develops during puberty, is one of the leading causes of male infertility and is found in about 40 percent of men unable to conceive their first child. The good news is, that for as common as varicoceles are, they are also fairly easy to correct through surgery, with a quick recovery time and relatively low risk.

What is a varicocele?

Similar to a varicose vein in your leg, varicoceles affect about 15 percent of all men but aren’t necessarily a precursor for infertility. Plenty of guys who have one are able to reproduce and don’t even know that there’s something going on down there.

The pooling of blood within the scrotum, usually on the left side, is a common cause of low sperm production and quality. As they grow over time, varicoceles can also cause the testicles to fail to develop normally or shrink. They are generally easy for a urologist to diagnose and usually asymptomatic; however, some men report experiencing pain, especially when standing or during physical activity.

How do you treat a varicocele?

Once a varicocele has been diagnosed, treatment is typically a type of surgery called varicocele ligation, or varicocelectomy, which is usually performed on an outpatient basis. During the microsurgery, which lasts about an hour, an incision in made in the abdomen to cut the vein that is feeding the varicocele. A patient can resume normal activity in about three to four days.

For many years, there were differing opinions on whether or not to treat a varicocele detected in a teenager. But a recent long-term study of adolescent varicoceles found that 77 percent of boys with a varicocele went on to successfully reproduce, compared to 48 percent of those who went untreated. Additionally, the time to conception was faster for the treated group—6.9 months compared to 11.2 months.

Varicoceles are also a common cause of infertility for men who once were fertile, which is a condition known as secondary infertility. Researchers believe that as veins continue to grow, they begin to impact fertility by raising the temperature within the scrotum, which affects sperm production, motility, and function.

If you and your partner have been trying unsuccessfully to conceive, your first step should be to test your sperm count to see if male infertility could be the cause. SpermCheck is a fertility test for men that lets you determine if a low sperm-count is the issue—discretely and accurately, right at home.

A low sperm-count reading might indicate a varicocele, which your urologist could confirm; you could then discuss your options, including surgery, to improve your chances for fertility.

Struggling with infertility and need answers?

An at-home sperm test from SpermCheck can help you know your sperm levels and discover the best next step in your fertility journey. Order your SpermCheck Fertility test today. 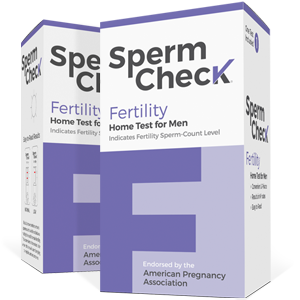